Tattoos and other forms of body art are becoming more popular with adults. Aside from the form of self-expression, tattoos are a great way to turn your body into a canvas and have art pieces you love on your skin. As long as adults know the consequences of getting a tattoo and are getting one willingly, there’s nothing wrong with having one made anywhere on your skin.

Before you get yourself a tattoo, make sure that you have done your own research, particularly with the design you have in mind. You may not be the superstitious type, but it does not hurt to play it safe with tattoos when it comes to luck. Professional tattoo artists say that there are certain designs that they deem as bad omen.

If you are the superstitious type, avoid them at all costs. But if you do not believe in the paranormal, by all means, go with these designs. And in case you change your mind in the future, you can always seek a specialist in tattoo removal. So, here are some of the tattoo designs considered to be unlucky.

Nothing spells trouble more than having your significant other’s name tattooed on your arm or anywhere on your body. For some people, it may seem like a beautiful declaration of love and endless devotion, but for veteran tattoo artists, it is a sign that the relationship is bound to fail.

Although there is no scientific evidence to prove that having the name of your girlfriend or boyfriend tattooed on your skin can be detrimental to the relationship, there has been anecdotal evidence that couples who did do that ended up regretting their decision because they eventually broke up. Tattoo artists claim that those who have asked for tattoos of their partner almost always come back to have it covered up because the relationship ended.

Apparently, it has less to do with superstition and more of the fact that many people use tattoos of their partners’ name as a last-ditch attempt to save a failing relationship. So if you feel like your partner is getting a little distant, getting a tattoo of their name may more likely annoy them or creep them out rather than sweep them off their feet.

So, if you wish to show your love to your partner through a tattoo, perhaps you can ask for a design other than their name. You can choose a design of your partner’s favorite animal instead, for instance. So that if you do break up, you can pretend that the dolphin on your forearm is “your” favorite animal.

Horseshoes are a universal signal for good luck and to ward away evil spirits. According to legend, St. Dunstan was once a blacksmith approached by the devil, who took the form of a horse. The devil asked Dunstan to fit him with horseshoes, but Dunstan recognized the devil and nailed horseshoes into his hoof. While the devil was in pain, Dunstan chained him and only agreed to let him go after the devil promised to never enter a place with a horseshoe hung on the door.

Unfortunately, the luck of the horseshoe is said to only come if the horseshoe is at the right position. If you are going to sport a horseshoe on your arm, you might want to think twice about how to position it. A horseshoe is actually a symbol of luck if it is positioned upright or like a “U” sign. If it is upside down, it is a sign of bad luck.

Although associated with Satanism and anti-Christian views, the upside-down cross has some religious meanings. When people opt to get upside-down crosses tattooed onto their skin, it doesn’t necessarily mean that they are against the religion, but rather when they look at their tattoo on their skin, they want to see it right-side-up. So, if someone wants to see a right-side-up cross on their arm without looking at a mirror, they’ll have to get a cross that looks upside down to everyone else.

For some tattoo artists, this is still considered unlucky. While the meaning of the inverted cross can vary, it is unfortunate that it’s associated with Satanic meaning, thus some people may receive bad luck. It can also give the wrong impression, especially for older people who may mistake it as a tattoo with negative meaning.

The valknut is a design with three triangles interlocking with each other. If you are not familiar with Norse symbols, you might even find this amusing. However, according to Norse mythology, this symbol is considered to be a sign associated with death. 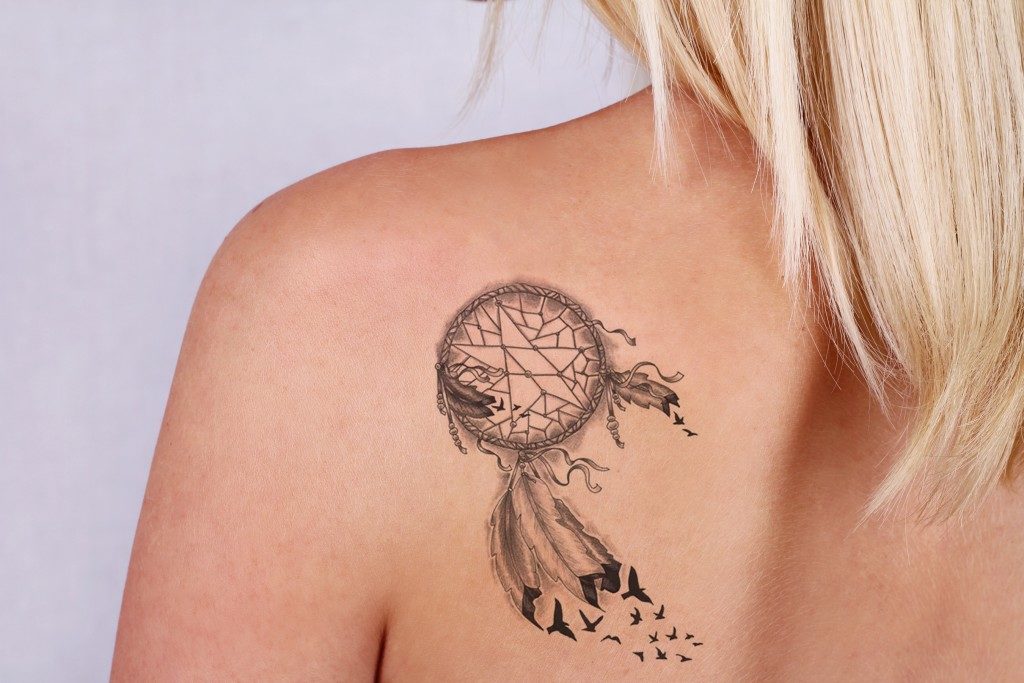 Larger and more complex tattoos will need multiple appointments to finish in one sitting. If you’re opting for a dragon tattoo, Chinese culture strongly recommends that your tattoo artist saves the dragon’s eyes for last.

Dragons are seen as your guardians, so having one inked into your skin means you are calling forth a dragon’s soul to protect you. But if your tattoo artist finishes the eyes first, the soul will enter the art first and endure the pain of getting tattooed until it is completed.

We’ve all seen that joke before: a white American getting a Chinese symbol tattoo thinking it means “strength,” but those who can read will snicker at the fact that he has “wastebasket” tattooed on his skin.

Unless you know what these characters really mean or have gone through the advice of someone who knows what it means, do not use Asian characters as a tattoo. A great example of this was when singer Ariana Grande got a Japanese tattoo to commemorate her successful song “7 Rings.” Because of the pain, she initially left out so many characters and thought she could get away with only getting a tattoo of two characters. That is, until social media pointed out that her tattoo didn’t translate to “7 Rings,” but shichirin, a small Japanese charcoal grill.

Also, if you’re going to post anything referencing a different culture, make sure you know the history and meaning behind it. Memento mori are a popular choice for tattoos, and while other cultures have their own memento mori, it can get lost in translation. Chopsticks on a bowl of rice, for example, are a symbol of death, but more as an offering to the dead.

Getting ink on whatever part of your body can be fun and your form of expressing yourself. You may still want to try out some of the ideas here if you are not the superstitious type. After all, it is your body and it is your personal choice to ink whatever design you want. But again, it will not hurt to play it safe when it comes to these tattoo symbols.